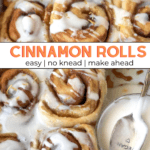 Nothing beats soft and fluffy homemade vegan cinnamon rolls. This quick and easy, cinnamon roll recipe is made with refrigerator bread dough! There's no fancy equipment, no kneading, and no mess. Just a few simple steps and you and your family will be devouring the best cinnamon rolls slathered with lemon cream cheese frosting!

Are you looking for ways to make meal time easier than ever? Having a batch of refrigerator dough ready to go in your fridge makes it super easy to whip up freshly baked cinnamon rolls, bread for sandwiches, soft dinner buns, the best burger buns, soft garlicky breadsticks, sweet buns, pizza dough, pita bread and so much more!

No more mad dashes to Cinnabons or to Trader Joe's when you're craving cinnamon rolls, now you can make a quick batch in your own kitchen! I've included easy, step-by-step instructions and all the tips to guide you along the way. Let's get baking.

Is this the easiest and best cinnamon roll recipe ever? I think so! Making cinnamon rolls from scratch usually requires a heafy time commitment and a bit of patience, but using homemade refrigerator dough takes all the work and mess away. Seriously, you just twist off a piece of dough, shape, proof, and bake! It's the best, foolproof, cinnamon roll recipe for everyone - beginners to pros!

Baking cinnamon rolls from scratch has never been simpler - you need only a few pantry ingredients. Egg allergy? No worries, these eggless cinnamon rolls are made without dairy or eggs!

How to make Eggless Cinnamon Rolls

Make the bread dough up to 2 weeks in advance and store in the fridge. On baking day follow these easy steps, you'll be enjoying your homemade cinnamon rolls in no time, and the house will smell amazing:

Why does the middle pop up?

If the cinnamon rolls are placed too close together or the pan is too small, the centers of the rolls can pop up when baked. Still tastes good though and you can quickly pop them back in when you remove the pan from the oven!

What can I add to cinnamon rolls?

Popular cinnamon roll add-ins include walnuts, pecans, raisins, chopped apple, chocolate chunks, and orange zest to name a few. Stir into the cinnamon sugar filling or sprinkle over the filling before rolling.
You might also try swapping the cinnamon for chai spice or cardamom spice (love from my Swedish roots - see photo).

How to Store and Freeze

To freeze baked cinnamon buns, wrap in plastic and tinfoil or in plastic wrap and a freezer proof container for up to 30 days. When ready to eat, remove from freezer and let thaw. Gently warm in the microwave, frost, and enjoy.

I'm here to tell you that baking without eggs and dairy is NOT boring, gummy or tasteless. Check out my Vegan Baking and Dessert page for more, but in the meantime, here's some EASY, vegan baking favorites that everyone loves:

Did you make this recipe? I'd love to see it!
Please leave a star rating and comment at the bottom of the page.
Thank you so much for sharing! Tag me on Instagram
For more Vegan Recipes: Sign up for my email NEWSLETTER! 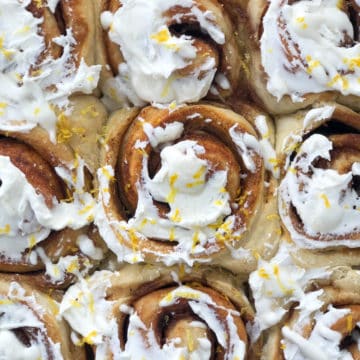 Learn how to make soft and fluffy vegan cinnamon rolls using an easy refrigerator bread dough recipe. No fancy equipment, no kneading, and no mess - this is the perfect recipe for beginners! The refrigerator dough contains no eggs or dairy, takes only 5 minutes to make, and can be made up to 14 days in advance. These gooey, buttery, brown sugar and cinnamon buns are a necessity for weekend brunches and Christmas morning at our house!
Author : Tracy Halasz
Servings:12 rolls

Choice of pan for 9 rolls -  use 8" round springform pan or 9x9 square.
For 12 rolls - use 9x13 pan (or similar).
To be sure your cinnamon rolls don't stick, line the pan with parchment and grease the parchment paper. If you don't have any baking paper, be sure to turn the cinnamon rolls out before the sugar hardens which happens quickly. Store cinnamon rolls at room temperature for 2 or 3 days - covered. In fridge for up to 5 days - but may benefit from a short trip to the microwave to freshen up. For best results - frost only a few cinnamon rolls at a time. Store the frosting and sweet rolls separately - frost before serving.

This recipe is from simplyceecee.co food blog. All images and content are copyright protected. Please do not use my images or republish this recipe without prior permission. Thank you.

Hi, I’m Tracy, welcome! I’ve been creating and cooking vegetarian/vegan food for decades, and love helping others on their journey to eat more plants. Here you’ll find super flavorful vegan recipes you and your family will love – vegan or not!